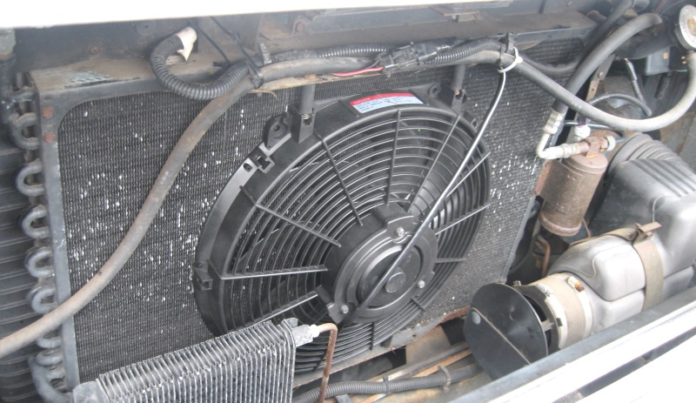 Whether you’re plowing through the streets with big horsepower, or stuck in traffic on a hot summer day, you need a radiator fan to keep that engine cool. Is your engine running hot and you’re not sure why? Your car’s cooling system is designed to manage the heat that comes off your engine. If your car is overheating, it may be an issue with your radiator fan. Keeping reading to find out if the radiator fan is your problem.

How Did the Radiator Fan Come About?

When you drive, the environment under your hood is aggressive and hot. When the car is on the move, natural air presses in and cools the engines. If the car is idling, or not traveling very fast, there is not enough air to cool the engine. Thus, the radiator fan, cooling fan, was designed to blow cool air on the engine in order to compensate for the lack of air from the environment.

The first radiator fans were mechanical, spinning around the clock from a belt-and-pulley system. Karl Benz introduced the first water radiator in 1885, in his gas powered Motorwagen, also known as the Tri-Car. The mechanical radiator fan served as a cooling system for the engine in rear-wheel drive automobiles. In more modern cars, the mechanical fan is usually mounted on the crankshaft pulley or water pump pulley and spins between the radiator and the engine.

What is a Radiator Fan?

The radiator fan can be mechanical, or engine-driven, and it can also be electric. Most older cars have mechanical fans; however, some have been retrofitted with electric fans. Here’s a brief overview of the main two different types of fan:

Mechanical, or engine-driven fans may be solid, flex, or clutch. The design is much simpler than that of the electric. Although they all do the same job, the design varies a bit between models:

Solid fans – the solid fan is the most primitive type of radiator with four to seven blades around a hub. The fan blades could be plastic or metal. Fan speed is based on the speed of the pulley, which is driven by a fan belt. This design is the most durable yet the least performing. When this fan is spinning, it consumes a fair amount of fuel. Since the fan runs when the engine runs, engine warmup is delayed. On top of that, the fan is running when it is not needed.

Flex fans – The flex fan is commonly made of solid steel or aluminum and designed with a central spider hub. The blades and contour spacing are calculated so that the fan flattens out at a specific RPM. The flex fan is a bit noisy and dangerous. When this fan breaks, debris may fly out.

Clutch fans – The clutch is bolted to a clutch unit, which allows driving the blade or freewheeling. The fan clutch extends out several inches in front of the blade. The design of this fan is also pretty simple, and it accommodates for when the car does not need a fan. The premium model clutch may even have a thermostat which reacts to air temperature.

Electric fans can provide a constant airflow to the engine. When we say electric fan versus a mechanical fan, the differentiation is between a fan that is motorized and one that is not. Electric fans are engine-driven too. The electric power to drive the fan motor comes from the engine. However, electric fans do not depend on whether the vehicle is idling, or how fast it is moving.

Modern cars used for high mileage need an electric fan. The electric fan either pulls the air in or pushes it through. The design may also include single or dual fans and a fan shroud. The blades may be straight or curved. The more current draw the fan has, the more air will flow to the engine. What kind of radiator fan do you have?

How Does the Radiator Fan Work?

Fans draw a large amount of power. The radiator fan regulates air, transmission fluid cooler, power steering fluid, and A/C condenser when the car is not moving or is not moving at a fast enough rate for air to naturally pull in from the environment. The radiator also keeps the coolant at a low temperature when it’s hot.

When the radiator fan is working properly, cool air is drawn in and blown over the engine. The air conditioning condenser and the coolant are kept cool. It is much less likely that you will have an overheating problem. If the fan does go bad, it can be associated with many other problems.

Symptoms of a Bad Radiator Fan

No matter which type of radiator fan you have, the fan can go bad for several reasons. Here is a list of symptoms that you can look for if you suspect your radiator fan has failed:

All is quiet – when the radiator fan is working, you can hear a whir. The sound is very noticeable and you should be able to hear it. When you cannot hear any whirring noise when the car is on, it may be because the fan is not working.

Check Engine Light – When your Check Engine Light (CEL) activates on your dash, it most often means there is trouble. The problem could be the radiator fan, other cooling system components, or another associated problem somewhere else under the hood.

Temperature Gauge – if the radiator fan is not working, your temperature gauge maybe rising toward hot. The coolant is no longer being cooled down as it circulates through the engine and the thermostat picks up the change. . The temperature gauge on your dash moves toward HOT and remains there until you turn the car OFF.

Cooling fan won’t come on – If the fan will not come on when the engine is started, this is a sure sign that the fan is bad. It could also mean that the cooling fan motor has failed. The fan may have just worn out over time. In any case, the fan blades cannot spin.

Overheating problem – If your car is overheating, it could be because the fan is no longer doing its job. The thermostat should activate the fan once the engine has reached a certain temperature. When the fan does not come on, the engine continues to heat up until the fan is on or damage occurs. The fan relay could also have failed. Although overheating is not only caused by a bad fan, this is very often the reason and should be investigated first.

Evaporating coolant – If temperatures under the hood get hot enough, the coolant will start to evaporate. This will likely only happen if your radiator fan is not spinning.

Air conditioning low performance – The radiator fan is also a support component for the A/C condenser. When the fan goes bad, the air conditioner air is not as cool or not cool at all.

Fan won’t shut off – When you turn your car OFF, and leave it in the garage, except for the alarm, the entire system should be shut down. In some cases, the radiator fan will just keep going and going, even when the engine is OFF. This should not be and could be caused by a few things, including an electrical short.

How to Fix a Bad Radiator Fan!

If your radiator fan is bad, chances are that you’re failing to maintain your vehicle. When you don’t look after certain components, this can cause a knockon effect and damage parts like the radiator fan. If you want to avoid this problem from happening again, you’ll need to look after your car.

If you want to avoid radiator problems or other issues and save $100s of dollars that you’ll spend at the auto repair shop, you’ll need to service your vehicle often – you can use our mechanic-rated Auto Maintenance and Repair Manual to do this. It’s basically what mechanics use to go through your vehicle to check if there are any problems that need fixing. As soon as they notice the most minor problem, they’ll ask you to fork out some money even though it’s a problem you can fix yourself in minutes – the manual will teach you how to maintain your vehicle every few thousand miles and it’ll teach you how to fix minor problems that mechanics will ask you to pay for; saving you money in the long run.

What to Do About a Bad Radiator Fan

When radiator fans fail, it quickly causes other problems under your hood. Some fan problems must be repaired right away to protect your engine. You can turn your engine on, open your hood and see if the fan is turning at full speed. If it’s not, or if your car is overheating, try these solutions:

Replace Radiator Fan Relay – A bad cooling fan relay (view on Amazon) can definitely stop your fan from working properly. The relay switches the low voltage signal from a sensor or the engine control module (ECM) to ON so that voltage from the battery will go to the fan. When the signal does not go out, the fan does not cool the engine. Replacing the fan relay is a common procedure. The relay is not hard to find; however, you should know what you’re doing. If you are not too sure about working with electricity, let someone who knows do it.

Replace Radiator Fan Motor – The radiator fan motor (view on Amazon) drives the electric fan. When things get hot, the motor is not driving the fan. In order to change the motor, you must remove the fan assembly first. Disconnect the battery to work on a fan motor.

Go to a repair shop – Dealing with radiator fans, sensors, and motors is not exactly layman’s work. Also, you want to know that you are repairing the right thing before you spend the money. Take your car to a repair shop where it can be diagnosed and repaired correctly.

That’s all you need to know about radiator fans and when to find out what’s going on with yours. Remember, safety first. Don’t drive your vehicle when the fan is not working.