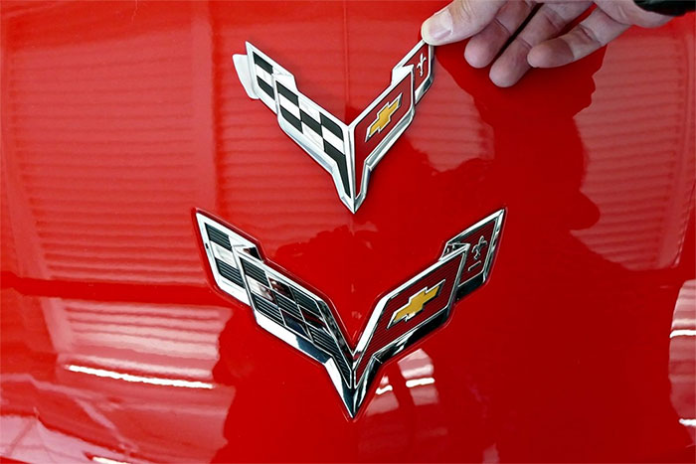 The past five decades have seen a tremendous change in the Corvette symbol. However, this has not made it any less recognizable. The first Corvette cars had a white, round symbol with two crossed flags.

On the right is a black and white flag, and on the left is a red flag with a featuring a Chevy bowtie symbol alongside a fleur-de-lis symbol. Beneath the fleur-de-lis, you will see three horizontal lines. The flags are strategically positioned between the circular symbol with the words CHEVROLET printed on top of the flags and Corvette at the bottom. The lower word is printed in cursive.

History of the Corvette Symbol

Corvette’s symbol history is rich. In comparison, many may not know that the American flag was in the place of the current red flag until four days to the launch of Corvette to the public. Robert Bartholomew, the designer of the Corvette logo, created the complete look with a white circle and two flags, with the American flag on the left side of the cross. However, there last minute changes done on the logo to remove the national flag from a commercial product. Having the American national flag on a commercial product is in contravention of national laws. Therefore, the American flag had to be replaced by the red flag that has the fleur-de-lis and the Chevy bowtie symbol.

The fleur-de-lis symbol originated from France. This French symbol represents purity and peace. In a literal sense, the symbol means, ‘flower of the lily.’ The original idea by Chevrolet was rather personal. They intended to get a family crest from Louise Chevrolet’s French ancestry. Unfortunately, the company could not find one from his past. Therefore, they went for the fleur-de-lis for its French roots. But the fleur-de-lis was accompanied by three horizontal lines at the bottom. Sometimes down the line, during the launch of Corvette, the company designed a new logo that replaced the old, original symbol.

The new symbol, after the original, was put on the 1953 Corvette. It was used in the subsequent productions until 1956. Like the original, the symbol remained a circle with two crossed flags. However, instead of being a flat, white circle, the flags were put on the glass above a silver metal surface. A new feature was added to the symbol, a V. The V signified the company’s move to V8 engines in the ’55, and it was put on top of the two crossed flags.

Words at the bottom and on top of the circle were not interfered with, more than capitalizing the word corvette. In the original symbol, the word corvette was printed in cursive. A new method of displaying the logo was also introduced alongside the redesigned logo. The company started displaying the symbol both in front and at the back of the vehicle. Before this, the logo was only displayed at the front.

This design was used on corvettes until 1961. While the rear symbol remained the same, the front logo was changed from a circle to a cut out of the two crossed flags and V. There were no words in the new design. In the year 1962, the company made new changes to the symbol by removing the V and featuring the cross flags on top of a gold-metallic circular outline.

A year later, in 1963, the car’s symbols saw major changes, both the front and the back logos. The front symbol was redesigned to have only two crossed flags and a V-shape. At the center of the V, a triangle was placed. The triangle had white, blue, and red horizontal stripes. The symbol at the back, on the other hand, was put on the car’s gas lid. Putting the rear symbol on the fuel lid would remain trendy until 1957 when the C5 was introduced in the market by the company. At the beginning of this trend, the entire gas lid served as the symbol. It was a large circle with a similar color to the rest of the car. It also had a very simple image of the crossed flags inside.

1964 Change in Color of the Rear Symbol

New changes were made to the rear symbol in 1964. The color of the fuel door symbol was changed and did not match the overall color of the car. The two crossed flags were fitted within a smaller metallic circle that was featured inside a bigger metallic circle that had a circular pattern resembling a ripple. While all these changes were made to the rear symbol, the front symbol remained the same. The rear logo at the fuel door was then changed in 1965. It had the crossed flags within a small white circle, inside a bigger silver and black aesthetically appealing, metallic circle. In the same year, the front symbol was redesigned into a simple emblem with only two crossed flags.

A major redesign was done on the rear symbol at the fuel door in 1966, while the front symbol remained the same. The symbol at the fuel door was redesigned to resemble what was on the door in the year 1964. However, this time around the symbol’s lines in the outer circle extending further outwards, where, originally, the ripple-like circles were fixed. In 1967, some changes were made on the front symbol, where the flags at the front emblem were slightly modified from the simple cross flag design to a flatter and more horizontal design. The freshly designed flags remained the same until 1972. In addition to changes in the front emblem, the rear symbol was redesigned to take smaller space in the fuel door. The symbol that contained the two crossed flags like ones on the front emblem was still attached to the fuel door.

1968 Changes in the Fuel Door Symbol

In 1968, the fuel door symbol was changed again. While everything remained the same, in as far as content and design are concerned; the size of the logo was reduced. The symbol was reduced to a bolt-on piece to your fuel door as opposed to being a fixed piece. This new design on the gas lid would be used throughout 1973.

The front symbol was changed to a circular symbol in 1973. The symbol had the two cross flags atop a red starburst design. The words CHEVROLET MOTOR DIVISION CORVETTE were written on the edge of the circle. These words were written in silver on a black surface. The company also used this symbol in the year 1974. The cars produced in this year did not have a rear emblem. The front symbol used in the following year, 1975, was similar to that of 1974. However, it had no words on edge. This saw the starburst symbol, and the flags made larger. The word CORVETTE was creatively written in silver beneath the crossed flags. This symbol was also used in the rear at the fuel door. These symbols were not changed the following year, which is in 1976.

The company changed both the rear and front symbols in 1977. The new design was simple and featured two crossed flags. This design was slightly different from the previous one. The design featured longer flags and had a single horizontal line under the fleur-de-lis as opposed to the usual three lines. Since then, the three lines have not been used in any other symbol again.

Corvette celebrated its 25 years in 1978. This year was dubbed the year of Silver Anniversary. Flags used on the symbol resembled those used in the symbol in 1977. However, this time around, the symbol was placed on top of a fancy metallic circle. The circle featured a starburst-type design where the two flags were placed on top. Above the flag’s center, the number 25 was put to indicate the 25th anniversary of the Corvette. On top of the circle, around its edge, the word corvette is written in capital letters. Below the flags on the edge of the circle, the words 1953 anniversary 1978 are also written. This symbol was used both in the front and the back of the car. In 1979, the company moved back to the symbols they used in 1977, both for the front and rear emblems.

The logo was redesigned once more in 1980. These changes were made to the front and rear symbols. The two crossed flag feature was still used in 1980. However, these flags were made thinner and longer. The front logo formed a small V shape that had a black outline. The back symbol was almost horizontal across the top. It also had a chrome outline. The company’s front symbol was retained in 1981. The rear logo, on the other hand, was made darker in appearance and had a black outline.

1982 marked the end of production of the C3 body style. For this reason, this year had unique front and rear symbols. These symbols had the crossed flags, drastically modified from 1981. These flags were not only simple but also shorter. The fleur-de-lis symbol was not included in the symbol for the first time. Therefore, the red flag only had the Chevy bowtie symbol. Most cars had the same front and rear symbol. The only exception was the 6,759 Collector Edition Corvettes. These sets of cars were manufactured to mark the final year of C3. These cars had a similar back symbol, while the front emblem had two flags circled by a black outline. The word corvette was written at the top of the circle while the words, collector edition, were written at the bottom. These words were written in yellow.

When the C4 body types were introduced into the market, the company redesigned its logo. The new symbol had the two flags. However, the flags did not contain the poles. The flags were long and thin but had no ripples. The two flags were interestingly reversed with the checkered flag placed on the left while the red flag was placed to the right. The red flag only featured the Chevy bowtie alone. These flags were positioned in a slight V shape and surrounded by a black circle. This symbol was used until 1991.

In 1991 the symbol underwent slight changes. The red flag with silver Chevy bowtie was changed to a black flag with a red Chevy bowtie. These symbols were used in front and the rear of the car until 1996. However, the Pace Car Corvettes, the 40th Anniversary Corvettes, 1996 Collector Edition Corvettes, and Grand Sport Corvettes used a slightly different symbol. They had a silver outline in their symbols in place of black.

The company introduced the C5 Corvette in 1997, which came with a new symbol design. The design looked like the symbols of the C4 body style. The red flag featured the fleur-de-lis alongside the Chevy bowtie. The flag poles were returned to the symbol.

Chevrolet Corvette is a cool car with a rich history. Its symbol is as much a means of identification as it is a historical piece which shows the transformation of the car over the past fifty years.