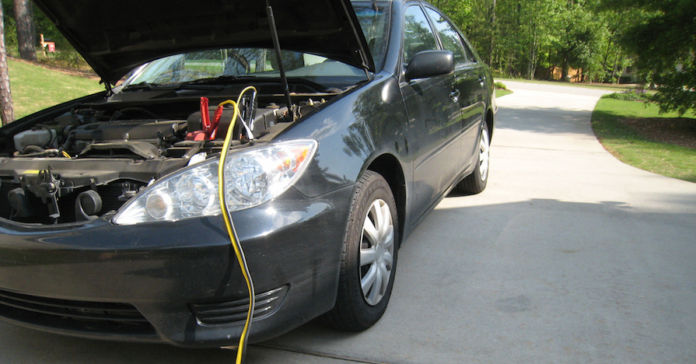 Car not starting is a fairly common problem that car owners experience every day. It is very frustrating when you are all set and ready to leave, but the car won’t start. Sometimes the engine won’t start, but all the other electrical components such as the lights work just fine. All the electrical components draw current from the battery to function effectively. However, the amount and path differ; for this reason; one component may work while the other won’t.

Reasons Why Your Car Won’t Start

Inside the fuse box, there is a metal wire with a plastic casing. If the metal wire is damaged, you will experience a blown fuse, which stops power from getting to the solenoid.

The battery supplies power to every component in your car, including the ignition and lights. Leaving your lights on may drain the fluid of the battery. Other electrical components can also drain the battery. Worn out and old batteries are also bound to fail with time. If you turn the ignition key and no dashboard lights turn on, then you could be experiencing a dead battery. If other car components like the windshield and AC are functioning properly, the battery may not be dead after all. Apply jump-start cables to get the car moving at least until you get it checked.

A car that won’t start due to a dead battery is every motorist’s fear. Fortunately, batteries often give warning signs before they die. This grace period they give before they are completely dead is so that you can have them replaced before you get stranded. Here are the signs to look out for:

Failing batteries are incapable of powering electrical components, not exempting the lights. Weak or dim light is a clear warning sign that the battery is failing.

Your car battery triggers the solenoid to start the engine when you turn the key in the ignition. A faulty battery will have a problem functioning effectively since the current that will be sent to the solenoid will not be strong. The solenoid will produce clicking sound if it receives low current from the battery.

Usually, car owners familiarize themselves with the noises coming from their cars. If you realize the engine’s unusual cranking, if you turn your key in the ignition, this could be an indication that your battery’s end day is near.

Stepping on the Gas Pedal to Start

Your car does not need gas to start. Having to press on your gas pedal to start the engine is a sign that it is failing.

A faulty car battery can cause occasional sparks. The sparks can lead to fuel piling up in the cylinder. Piled up fuel is ignited with excessive force, causing your car to backfire. However, backfiring is a symptom of various other problems.

The issue could be in the starter if the battery is in good condition. A starter draws power from the battery to start the engine of your car. Clicking noise when turning the ignition key indicates a faulty starter. There may be loose connections that need to be fixed, or maybe you just need to replace the starter. Jump-starting your car can get it running or maybe not.

The fuel pump pumps gas to fuel the engine. When the fuel pump fails, gas cannot be pumped. Wear and tear in the fuel lines cause low pressure. Sometimes the fuel lines may also be blocked. When a fuel tank runs dry, the fuel tank wears out rapidly. Lack of regular maintenance, for instance, changing the fuel filter also contributes to fuel pump failure. Reduced mileage, unexpected loss of power, and jerking engine while speeding is signs that your fuel pump is failing.

If the battery, the starter, and the fuel pump are in good condition, but the car still won’t start, then the problem could be with the spark plug. The engine starts when the spark plug ignites the compressed air and fuel mixture. When the spark plug suffers mechanical damage, it will fail. Overheating or dirt in the spark plug causes it to fail. When it fails, the engine won’t start due to a lack of ignition. Fortunately, spark plugs are easy and not costly to replace.

The function of the fuel filter is to make your fuel lines clear. Clogged filters cause several problems, including the engine not starting. Regularly change oil and replace the fuel filter yearly. Changing the fuel filter varies from car to car. Use the manufacturer’s manual guide to determine how yours work.

If you fail to look after components in your car, you shouldn’t be surprised when you notice problems. Maintaining your vehicle is a crucial process that needs to be done by every car owner and it prevents you from experiencing a lot of problems. Failure to look after just one component can cause a knock on effect and this can be felt in other areas of the car. Maintaining your car will result in you spending less money at the dealership because of well you look after your car.

If you want to avoid engine problems or other issues and save $100s of dollars that you’ll spend at the auto repair shop, you’ll need to service your vehicle often – you can use our mechanic-rated Auto Maintenance and Repair Manual to do this. It’s basically what mechanics use to go through your vehicle to check if there are any problems that need fixing. As soon as they notice the most minor problem, they’ll ask you to fork out some money even though it’s a problem you can fix yourself in minutes – the manual will teach you how to maintain your vehicle every few thousand miles and it’ll teach you how to fix minor problems that mechanics will ask you to pay for; saving you money in the long run.

Sometimes you might not start the car since the key will not turn in the ignition. This is mostly an anti-theft feature where the steering locks when you remove the key. Nudge your steering wheel right or left as you turn the key until the anti-theft lock releases. Start your car.

Sometimes the things you do or not do may hinder your car from starting. New models of cars come up with new ways of doing this, and lack of knowledge about these things can not necessarily be blamed on you. Here are some of the common possible mistakes you make that may stop your car from starting normally.

Getting stranded in the middle of nowhere because your car won’t start is a frustrating experience. Sometimes all you need is to get it up and to run temporarily so that you can get to the nearest mechanic to get it checked and the problem fixed.

Don’t call for a tow yet, try these fixes;

If your car won’t start but turns on, try turning on your dome lights and start the engine while watching the lights. Lights going out is an indication that the battery is failing. Key cycling will help heat the battery, starter, and terminals. Turn the key continuously to start position several times. Wait for about 5 minutes then repeat the process. Start the engine again; if the dome lights didn’t go out when you started the engine, then this fix won’t work.

Cleaning corroded terminals of the battery when the car stops unexpectedly when you’re driving and won’t start is not easy, especially if you have no proper tools to do the work. Start the engine again afterward.

Electrical contacts sometimes get stuck, and smacking them releases them. Try smacking the starter if you have access to them.

With all the electricals turned off, turn the key in the ignition to ‘run’ position. A buzzing sound indicates that the fuel pump is building up the injection system. No sound at all means the fuel pump relay is faulty. The fuel pump rely on is located on the fuse box cover. Find it and pull straight. Find another relay and exchange it with the fuel pump then move it into the socket. Now start the engine.

Remove Excesses from a Flooded Engine

The smell of gas indicates that the engine is flooded. Push the pedal of the accelerator to the floor, hold it in place while cranking the engine.

Leaks can result in lean air and fuel mixture that can’t start a cold engine. Pressing the accelerator all the way half will trick the computer into adding more fuel.

When the car doesn’t start, but the lights work, among several other causes, there is the possibility of a failing battery even though some electrical components work. The lights and other electronic components may draw power from a failing battery, but the engine won’t because of the quantity of the currents each of the devices draw and sometimes interruption on the engine’s path.