Motorsrun
Home MAINTENANCE Blue Point vs Snap On: Which is Better? 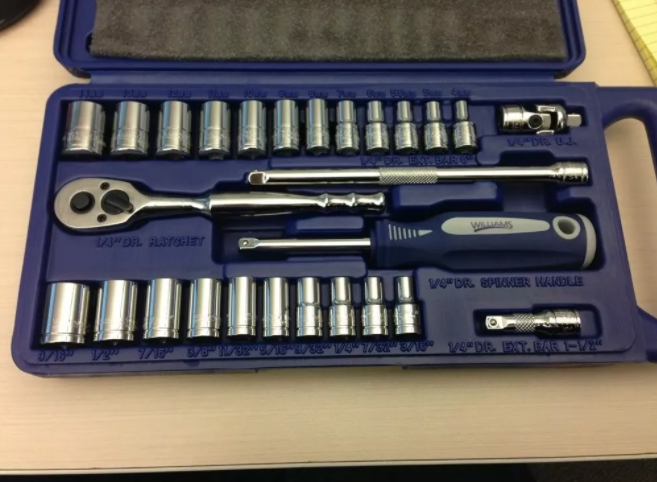 Important: If you want to save $100s in servicing, diagnosis, and repair costs, improve your car's performance significantly and increase its value by 1.2x with little effort, download our Beginners Auto Maintenence & Repair Manual now.
Most automotive technicians would agree that the primitive wrenches and screwdrivers have evolved in design and performance. Some of those old tool sets now come with over 1,000 pieces. The best automotive tools come well packaged with a good variety of tools that are high performing and save time. High quality tool sets will also come in SAE and Metric designs.

The features that tool manufacturers off are very important. In fact, many technicians are willing to pay more for higher quality tools. Yet, there are many tool manufacturers out there these days and some of the products are low end, often having to be replaced. Snap-on tools and Blue Point have been in the running for a long time offering high quality and affordable prices, respectively.

Motor cars flashed on the scene at the open of the 20th century opening up a whole new world of construction and repair. The maintain and repair of the automobile natural sparked new interest in machine tools. Some of the first automotive tools are now extinct while others are still here and have hardly changed at all. The wrench was one of the first simple tools used to tighten or remove nuts. The wrench has since evolved into several versions which contribute to improvements in automobile repair.

The introduction of supporting materials like compressed air in mechanic shops had an effect on the type of tools that were being designed. The need to lift the vehicle off the ground was one of those early considerations. Analytic tools and emissions concerns followed in the mid-20th century. Some of the tools actually made the need for a specific repair obsolete.

Early, twentieth century cars were not nearly as present and widespread as they are today. Wrenches, pliers, and utility knives were the only things being showcased at the start. However, automotive-related inventions and upgrades continued to pour in from around the world. Black & Decker came on the scene with power tools around 1910. New designs for automotive tools began to flourish as automobile designs became more sophisticated. Many automobile components become powered with sensors. The tool needs of the automotive mechanic changed.

Over the past century, Snap-on tools have literally become a household name. Snap-on is a producer and distributor of high-end tools and equipment that can also be used in the aviation, railroad, automotive and marine industries. With more than 65,000 tools and 3,000 pending patents, Snap-on tools have a reputation for high quality craftsmanship, high performance, and innovation. Some will say that Snap on tools are the best on the market. Snap on tools are generally made of steel for higher alloy and nickel chrome. Due to the high quality and popularity, Snap on tools are also expensive compared to other brands.

Snap-on tools was founded in 1920 in Milwaukee, Wisconsin aby William Seidermann and Joseph Johnson. The company was founded at a time when automobiles were changing the culture in America. Automotive repair was expanding as a large industry with companies like Craftsman quickly growing in international status. The manufacturing plants for Snap on tools are now located in Wisconsin, Iowa, Tennessee, California, Illinois, Arkansas, and Kentucky.

The air tools for the brand are made in North Carolina. The release of the first five interchangeable handles and sockets put Snap-on tools on the map as an industry leader. The sockets snapped onto the handles and the company boasted that the tools significantly reduced the mechanic’s workload. As the Snap-On tools became popular, the founders continued to expand the company’s reach in the automotive market.

The company now serves consumers in over 130 countries throughout the world with 4,900 mobile stores. Snap-on also offers unprecedented customer and product support. Some of the most popular products are the screwdrivers, wrenches, ratchets, sockets and extensions, pliers, and work lights.

Snap-on tools became patented in 1921 with the patent of an offset 12-point wrench by F.W. Blackmar. Snap-on tools offered Diamond brand wrenches in its catalogs. In 1930, a reversible ratchet wrench was patented by L.A. Hummel. Product catalogs and customization became a prat of the company’s profile. Orders for the parts flooded in from all around the world.

Some may say that Snap-on tools have become a monopoly in the United States. By the 1970s, Snap-on had to expand its operations while celebrating 50 years of being in business. Franchises were offered which drove the company’s amazing growth. The new millennium meant continuous improvement for the Snap-on tools as the company maintained its reputation. In 1999, Snap-on tools acquired the Swedish Bahco hand tool brand. Snap-on tools also acquired other companies from 2002, such as Pro-Cut, and began certifying users of their tools. The company continues to invest in research and the communities which is one reason why Snap-on tools remains the world leader.

Like many high-end companies do, Snap-on tools decided to make a less expensive version of its main tool line. In 1925, Snap-on tools introduced a lower end brand called Blue Point in Milwaukee, Wisconsin. In 1929, the Blue Point logo was submitted for patent in Chicago, Illinois and was granted in 1930. The name had been in use since 1923.

Snap-on is much more than a big tool manufacturer whom everyone seems to like. If you are shopping for tools, Snap-on will show up at your door, you can search the Snap-on Techknow Express truck or the Rock-n-Roll Cab express for the tools you need, and Snap-on will finance the tools at 0% interest. If you have a broken tool, you can replace it. Of course, the price of Snap-on tools reflects the extremely high level of service and convenience. The only places you’ll like see Snap-on tools for sale is by Snap-on, used in a pawn shop, or on Amazon (view on Amazon) as the products are generally only sold by dealers.

It would be difficult for any other tool manufacturer to compete with Snap-on tools. Snap-on has been around long enough to carry a boatload of notes for their tools. The truth is, Snap-on has even bought out a few other tool manufacturers, such as Williams, and added the company name to those products. Therefore, the Snap-on brand no longer guarantees that those tools are being made in one of the original American manufacturing plants. The Williams Mammoth tool set is now listed as a Snap-on Industrial brand and is priced as high as $30,000. Yet, there is also no denying the quality and high performance of the Snap-on products, not to mention the warranties. So why on earth would someone buy tools from anyone else? Basically, it is the price.

Blue Point tools (view on Amazon) are ideal for people who cannot afford the Snap-on price tag. They are also ideal for people who will likely only use certain tools out of the set after the purchase. The general consensus is that Blue Point tools are not quite Snap-on tools but for many they will do. The truth is, not many tool companies can compete with Snap-on tools. Blue Point is just a part of a large sector in the market that can’t compete with Snap-on. If a person has been successful in the automotive repair business for a decent amount of time, or a rookie starting out with no tools, Snap-on could be the most ideal. However, Snap-on is not ideal for the average do-it-yourselfer (DIY) mechanics because the costs of the Snap-on tools exceed the costs of taking the vehicle to a repair shop. Many people will do just as good with the simplicity and affordability that comes with Blue Point tools. On the other hand, if you are in business as a professional, you should not use cheap tools.

Choosing a tool manufacturer can be a big step if you depend on the tools for your livelihood. Buying professional automotive tools is a life-long commitment as the products are tied to contracts and warranties. Before choosing a manufacturer, evaluate your needs and your budget. Then choose tools from a company that will stand behind their products.